Film / Changing Our Minds: The Story of Dr. Evelyn Hooker 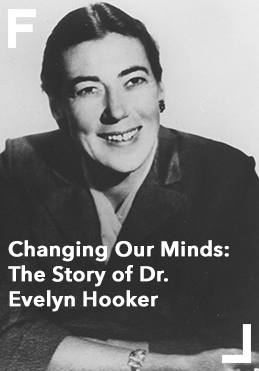 Changing Our Minds: The Story of Dr. Evelyn Hooker is a 1992 feature film directed by Richard Schmiechen.

It is a documentary of the life and career of Dr. Evelyn Hooker, a pioneer in human sexuality. After an eventful early life that included being denied admission to Yale because she was a woman, and studying in Germany at the time of the annexation of Austria in 1938, Hooker began to explore the nature of homosexuality in human beings. Standard psychiatric doctrine of the day deemed homosexuality a mental disorder, and homosexuality was included in the DSM as a disease. This both justified discrimination against homosexuals and also led to terrifying "cures" like shock therapy and lobotomization. Hooker's contention was that homosexuality was not a disease and that homosexuals were just as well adjusted, on the whole, as heterosexuals. Through her research, she set out to prove it.