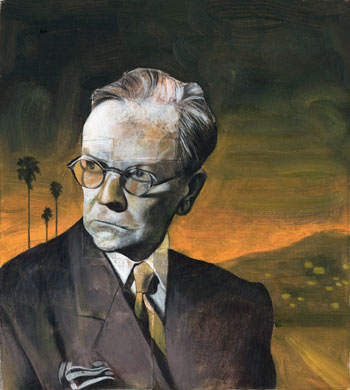 "But down these mean streets a man must go who is not himself mean, who is neither tarnished nor afraid."
— The Simple Art of Murder

Chicago-born and London-raised, Raymond Thornton Chandler (July 23, 1888 – March 26, 1959) was and is one of the most influential writers of and on Hardboiled Detective fiction, through seven novels, many short stories, and a number of essays, of which the most famous is 1944's "The Simple Art of Murder". He also had an influence on the developing Film Noir, both indirectly through adaptations of his novels, and more directly through a stint as a Hollywood screenwriter (he wrote the screenplays for Double Indemnity, The Blue Dahlia, and Strangers on a Train).

Chandler's works with their own trope pages include:

Chandler's other works provide examples of: