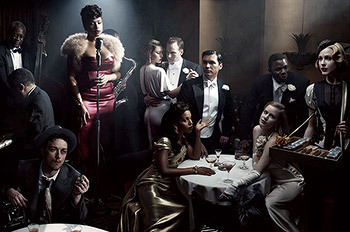 The period of the classic American detective stories, especially the hard-boiled ones. The classic era of Film Noir.

War may have broken out in Europe, but for the moment it's still the Jazz Age in the USA. Big business is run by Corrupt Corporate Executives. Young, possibly disabled boys shout newspaper headlines on every street corner. Everybody Smokes and everyone wears hats. And while the well-off enjoy former speakeasies-turned-quasi-legitimate nightclubs, the aftereffects of The Great Depression still overshadow the lives of the poor.

The Trope Namer is Stephen King's short story "Umney's Last Case", named in honor of Raymond Chandler, writer of The Big Sleep in 1939 and adapter of the screenplay for James M. Cain's Double Indemnity in 1944, making him one of the major Trope Makers and Codifiers of this vision of America.

In King's story, private eye Umney suggests it is "1938, maybe '39, maybe even 1940" and calls this "eighteen months or so before the start of World War II". Prohibition is probably over, but the power that The Mob gained in that period means they run many of the bars and clubs. The police may be trustworthy or they may be corrupt. They may very well be brutal.

The differences between this and the Genteel Interbellum Setting, with which it overlaps with the last years of, are pretty much the whole point of Raymond Chandler's essay The Simple Art of Murder

: Chandler American Time differs in being more urban, more cynical, more violent, more temporally specific (in terms of the culture depicted, Chandler American Time is confined to the very tail end of the Genteel Interbellum Setting, including The '40s and first few years of The '50s) and quintessentially American, whether geographically confined to the continental US or focusing on what amount to pockets or colonies of America in other cities, like Rick's Cafe Americain, Jo Gar's Manila, or cities Americanized by American businesses in the wake of the Second World War.

Crimes are committed by the kinds of people who commit crimes in real life, and by realistic methods. Shootings by ex-gangsters trying to prevent their past being exposed? Yes. Chief of French police chopping a millionaire's head off, then switching it with another head he pinched from the guillotine, all because the policeman was an atheist and wanted to stop the millionaire leaving his fortune to the church? No. (That's the actual solution of Father Brown: The Secret Garden!)

Since elaborate but silly murder methods are out, any crime must have many suspects and incredibly tangled motives in order to be puzzling. This is usually helped along by having the poor sap that kicks off the plot being a bit of an Asshole Victim.

Also the standard timeframe of Two-Fisted Tales, such as Indiana Jones or The Rocketeer. For additional information on the overlapping era in comics, see The Golden Age of Comic Books. Often subject to Comic-Book Time, Setting Update, and Ambiguous Time Period.

Nothing to do with Chandler Bing. Shares the same namesake of Chandler's Law, though not inherently related. Subtrope of Film Noir.