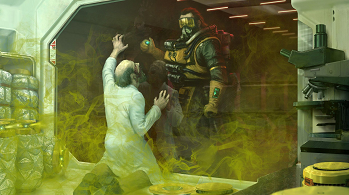 A purpose-built or improvised enclosed space used to kill through suffocation and/or the introduction of Deadly Gas.

Infamously employed during The Holocaust. Also employed as an execution method in several of The United States, and still on the books as a method of execution in six states, although no American prisoner has been gassed since 1999.