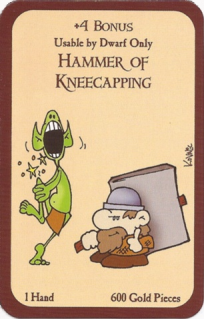 Too bad it wasn't an arrow.
Zoe: Preacher, don't The Bible have some pretty specific things to say about killin'?
Book: Quite specific. It is, however, somewhat fuzzier on the subject of kneecaps.
— Firefly, "War Stories"
Advertisement:

The act of deliberately damaging someone's knees to incapacitate them or limit their mobility. This can be performed by shooting the victim's kneecaps, or by striking them with kicks, melee weapons, or other up-close and personal means.

Since this is an extremely painful type of injury, knee-capping can be used as a brutal form of Mutilation Interrogation. This can kill two birds with one stone for the savvy torturer, as the permanently debilitating nature of the injury makes it much more difficult for the victim to escape. Tearing up all that muscle, those sinews and those complicated bones with a bullet would in Real Life probably leave you crippled for life, if you weren't killed by blood loss or shock.

Knee-capping can also be used as a tactic in combat to drastically hamper the mobility of an opponent. Needless to say, this type of fighting is a bit too dirty for most upstanding protagonists, so it is often reserved for villains, Anti Heroes, and Combat Pragmatists.

In real life, it is often not the kneecap itself that is the target of these attacks, but rather the joint and tissue beneath it. A piece of "Common Knowledge" is that kneecaps don't repair when broken/shattered. They do when treated properly, it just takes a very long time. Additionally, unlike in film and television, you would never actually aim to shoot out someone's kneecap or leg to disable a target in such a manner (see the Real Life section below).

Often used by a Combat Pragmatist. Compare Agony of the Feet for other mobility hampering injuries, and An Arm and a Leg for occasions when the legs are lost completely.

Titus wields a Chainsword and Bolt Pistol as his basic armaments, like he did in the first Space Marine game.

Example of:
Sword and Gun

Titus wields a Chainsword and Bolt Pistol as his basic armaments, like he did in the first Space Marine game.