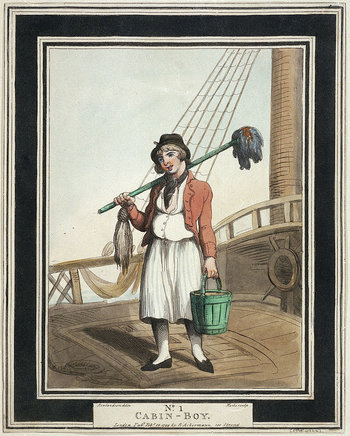 A cabin boy is a crew member on a ship, almost always the youngest person aboard, who waits and performs various errands on a ship, such as relaying messages, carrying buckets of food across the ship, scrubbing the deck, and keeping the wheel steady during good weather. They're typically at the very bottom of the ranks on a ship.
Advertisement:

In stories, the cabin boy tends to be either a preteen or a young teenager, though they can sometimes be in their late teens or a young man. Either way, they're far younger than the rest of the crew. In a story set at sea, if the cabin boy's not the protagonist, they'll usually be a Tagalong Kid of sorts. If they're a cabin boy to a pirate ship, they'll generally be the least villainous one aboard, as Children Are Innocent.

Almost Always Male. Even in the days of fiction where females can be seen in various roles on a ship, such as captain, first mate, navigator, etc, you're unlikely to see a cabin girl anytime soon (or at least not an openly female one. There's the occasional Sweet Polly Oliver posing as a cabin boy). Compare the Plucky Middie, who is the youngest and lowest ranking of a ship's officers, and often isn't much older than a cabin boy despite his authority over the crew.