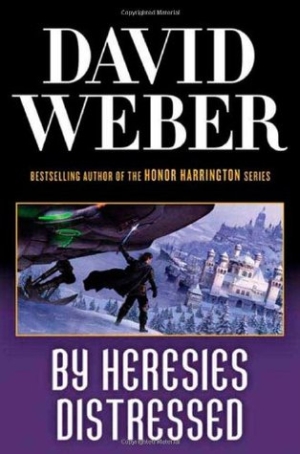 This scene actually happens in the book.
"Earth is dead. Humanity is hiding. Invention, Progress, Change... are all forbidden.
It's time to change all that."
— Tagline from Off Armageddon Reef
Advertisement:

When a spacefaring humanity discovered evidence that a hostile alien race known as the Gbaba was likely to try and annihilate them, they spent the next ten years preparing for the inevitable war.

In the face of extinction, the human race played a last desperate gamble. They secreted a fleet away to terraform and colonize a new homeworld and prepare for Round Two. To remain hidden long enough to make sure the Gbaba wouldn't find them, those in charge of Operation Ark decided that on this new world, humanity would temporarily abandon its technology, so the Gbaba couldn't track them down by their emissions, and retrieve it later to confront the Gbaba again on their terms.

That's when the real trouble began.

Nine hundred years later, Terran Federation commander Nimue Alban wakes up in a robotic body called a PICA; inside a giant, strange cave, with no memory of how she got here. A recording left behind by her late mentor updates her with the bad news: Ark's chief administrative staff brainwashed the colonists into forgetting everything. Technological progress was banned under punishment of painful death, opposition was wiped out in a kinetic strike, and the planet of Safehold is now stuck in Medieval Stasis with the universal Church of God Awaiting suppressing most progress. The current Grand Inquisitor is a megalomaniac and control freak. The web of lies woven by Ark's chief administrator is bound to be unraveled sooner or later, and with no knowledge of the Gbaba humanity is sure to be annihilated again — this time, to the last man.

Desperate to reveal the truth and avenge the Terran Federation, Nimue allies with the small island kingdom of Charis, a nation too independent in the eyes of the Church. Under the identity of a mythical warrior, a seijin, called Merlin Athrawes, she starts to steer Safehold slowly but surely towards the improvements it needs to survive — improvements the Church strictly prohibits.

The Safehold series by David Weber consists of ten books to date:

all its own. For similar series, see David Drake's Belisarius Series and S. M. Stirling's The General Series.

open/close all folders
A to H
I to Y