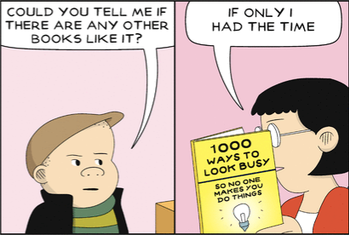 If the book doesn't give it away her attitude will.
"Captain Wentworth, however, came from his window, apparently not ill-disposed for conversation; but Charles Hayter soon put an end to his attempts by seating himself near the table, and taking up the newspaper; and Captain Wentworth returned to his window."
— Persuasion
Advertisement:

What are our characters to do when they want to pretend to be busy, avoid small talk, hide their embarrassment, back out of an uncomfortable situation, create a minor distraction, avoid suspicion when they do something suspicious, or don't want to look bored or unoccupied?

Here are some options (Sub-Tropes):

Here are some other options:

Sometimes the 'pretend occupations' can appear perfectly normal and ordinary. Sometimes the activity can be quite useful or even entertaining to some degree, but often it's all too clear that people have hidden or ulterior motives. Some of those activities almost never look natural and they clearly signal that something is off or that you are bored. Especially if the characters are very honest or bad liars, they'll make a poor job of this and end up Acting Unnatural. Which means they're likely to draw all the unwanted attention to themselves.

A common thing to do in fiction as well as in real life.