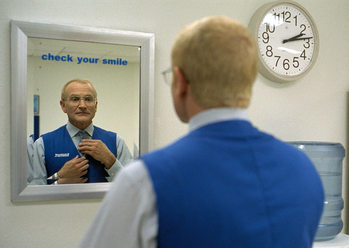 The big box store variation of the crappy fast food McJob or the low-level office job.

The store is filled to brim with merchandise reaching up to the fluorescent light ceiling, annoying consumption-crazed customers and of course, dozens of overworked, underpaid disgruntled employees. This is where dreams of a successful career go to die, right into the discount bin.

The New Job Episode will often focus on one character working in such an environment (if he doesn't become a Burger Fool) and then subsequently finding out being a grocery store or local Wal-Mart employee is not as easy as it looks. Alternatively, the fiction will sometimes focus on those poor souls that have already been working there for years (such as in Clerks, Employee of the Month, or Superstore) and will give the viewer an inside look at life behind the counter. A prolonged period of working one of these jobs may result in an Apathetic Clerk.

Either way, as this is Truth in Television, having this job is certainly no fun. Between the obnoxious customers who think "the customer is always right" is Serious Business, lazy and incompetent coworkers laying all their tasks on the interns and temps, the horrible music (especially during the holiday season), and the tyrannical management, quitting or getting fired is sometimes the only way out. In the U.S., since a lot of manufacturing has been moved overseas, retail has become the standard low-skill, low-wage job. Unfortunately, with the prevailing retail apocalypse resulting in numerous retail chains downsizing seriously or going out of business altogether, this job is getting more precarious as well, especially with rise of self-serve checkout kiosks threatening to replace the cashier operators.

If the store is making people's lives miserable outside the store as well, it's a Predatory Business.

Has nothing to do with literally sucking a soul.