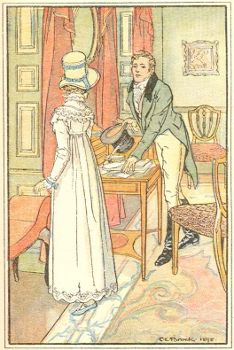 "All the privilege I claim for my own sex (it is not a very enviable one: you need not covet it), is that of loving longest, when existence or when hope is gone."
— Anne Elliot
Advertisement:

Jane Austen's last completed novel, published posthumously. A much more contained, simple story than some of her more popular novels, it has as its heroine Anne Elliot, a 27-year-old spinster. Keenly intelligent, sweet, and selfless, Anne was considered very pretty in her youth and fell deeply in love with a young naval officer, Frederick Wentworth, seven years before the novel began. However, she was influenced by family friend Lady Russell to reconsider her engagement with Wentworth on the grounds of imprudence — Wentworth being merely an ambitious young stripling with no real social status, no money and no sure prospects. Anne was thus persuaded to break it off.

When the novel opens, Anne is much reduced: unable to find love after Wentworth, and having rejected a match without love, she has grown faded, isolated and frustrated by the machinations of her grasping, petty-minded family. Her father Sir Walter Elliot having squandered their fortune trying to live up to his inflated conception of a baronet's prestige, the family are forced to lease out their estate Kellynch to the Croft family. In so doing, Wentworth is reintroduced to Anne's social circle — he is Mrs. Croft's brother. It turns out that Wentworth is now a captain in the navy and has amassed a considerable fortune through prize money (the novel is set in a lull between engagements with Napoleon).

Anne is forced to realise that she is still very much in love with Wentworth — and that he still harbours a deep resentment towards her.

Ironically enough, having established himself comfortably both professionally and socially, Wentworth now has nothing more to wish for than to settle down and marry. Anne is forced to stand by and watch as he focuses his attentions on her brother-in-law's sisters, who are seemingly as lively and strong-willed as Anne once seemed weak and inconstant... but appearances can be deceiving, and as the autumn wears on everyone has something to learn about tempering romance with reason.

Meanwhile, Anne's cousin William Elliot, who will inherit her family's estate upon her father's death, has insinuated his way into her family circle and seems set on courting Anne, much to Lady Russell's approval; after all, he is charming, correct, the perfect paragon of respectability... everything Wentworth wasn't, all those years ago. So why does Anne never feel like she really knows him?

This being a novel by Jane Austen, you can guess how it all ends.

Though short, Persuasion is a thoughtful treatment of lost love, family fidelity, ambition, gender differences, and constancy in spite of adversity. Written toward the end of Austen's life during the advent of her fatal illness, it is tempting to read some authorial self-reflection into the story, and especially into Anne's character. Regardless, it is a subtle, emotionally sophisticated, and deeply affecting novel.

Made into a Granada miniseries in 1971, a movie starring Amanda Root and Ciarán Hinds in 1995, and a made-for-tv movie (this time starring Sally Hawkins and Rupert Penry-Jones) in 2007.

A new feature film adaptation was announced in September 2020, to be filmed in 2021 and released by Searchlight Pictures, starring Sarah Snook and Joel Fry. Coincidentally, Netflix has also announced plans for a "modern" retelling starring Dakota Johnson.

Tropes appearing in the adaptations: