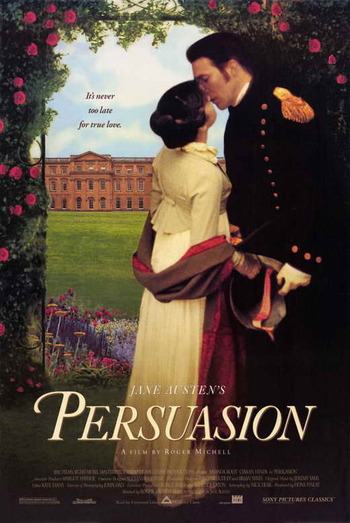 It's never too late for true love.
Advertisement:

The second movie based on a novel by Jane Austen to come out in 1995, and the second movie treatment of Austen's last completed novel. (The first version was a 1971 miniseries. A third, made-for-TV movie would follow in 2007.) Persuasion largely follows the plot, tone, and tight character focus of the book, with very little shift outside of the point of view of the protagonist, Anne Elliot. While much less well known than the sensational Aug Lee & Emma Thompson version of Sense and Sensibility, Persuasion shares much of that film's attention to manners, costume, and attitudes of the Napoleonic Era in domestic England. A reviewer once suggested it was a retelling of the Hornblower novels of iron men and wooden ships - only from the point of view of the women left on shore.

Persuasion opens on what might be the end of an era - the Elliot family has fallen on hard times, and must surrender the ancestrial home to a renter in order to pay off the Baronet's debts. The renter is a naval man, an Admiral Croft, who is now retired from the sea, and wishes to find a place to settle with his wife. But more connects the two families than the house - once upon a time, Anne Elliot was much in love with the Admiral's brother-in-law, Frederick Wentworth, and he with her. Persuaded by wiser heads to break off the engagement, Anne has never found a comparable match in the years since. And now Wentworth is home from the sea - famous, wealthy, and without a glance aside for Anne. Really. It's completely by accident that he keeps showing up where ever she is.

You can guess how this is going to end up.