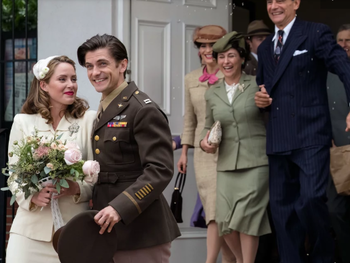 ♪ There's an awful lot of awful things we could be thinking of
But for just one day, let's only think about love! ♫
— Steven, Steven Universe, "Reunited"
Advertisement:

The atmosphere of a lot of war stories is generally saddening and depressing, if not outright horrifying. That said, when a writer thinks that enough is enough and that these poor characters need a bit of happiness in their lives without deviating from the somber war genre, then what better way to show that than to have two characters get married?

The Wartime Wedding is a great way to put a Hope Spot in a war story in order to lighten the mood. Among other things, a marriage symbolizes love and unity and can remind the characters that things such as happiness still exist. At the same time, the usual joy of the wedding day is undercut by the tragedy of war. Can also involve a Perilous Marriage Proposal.

This can come in three types (but is not limited to them):

The Star-Crossed Lovers are subject to this a lot of the time in war stories. Expect the couple to Altar the Speed. Compare Married at Sea. Beware the possibly unmarked spoilers!

As the Clone Wars begin, Anakin and Padme are shown marrying in secret.

As the Clone Wars begin, Anakin and Padme are shown marrying in secret.