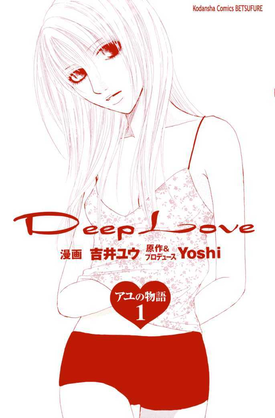 Flowers can't bloom in such a dirty city.
Advertisement:

Deep Love (Ayu no Monogatari - The Story of Ayu) is a tragedy story that started the genre known as "Text Novels". It was written in 2002-2003 by "Yoshi" aka Miwako Sugiyama.

It tells the story of Ayu, who works as a prostitute, believing that money is the most important thing in the world and that all men want is to have sex. She lives with her drug addict "boyfriend", Kenji, and occasionally goes to school, where only one person looks forward to seeing her: Reina, who also sells herself for extra money (named Reika in the live adaption... for a bit). Things slowly change when she meets an old lady that changes her outlook and one adorable dog that follows her around.

The book was a big success and spawned a two-book manga series, a 13-episode live action drama (2004) and one movie (2000). Spin-off mangas for Reina (Reina no Unmei) and Pao (Pao no Monogatari) were also written. There is also the manga sequel Deep Love: REAL which is a continuation of the story and about Yoshiyuki's life as a host; this got turned into the twelve episode show Deep Love ~Host~.

Tropes appearing in the various sequels/spin-offs:

open/close all folders
Pao No Monogatari
This is a two volume manga, a prequel showing what Pao's life was like before Ayu found him in the park. The second volume follows his life through his time with Ayu and the others - being unsubtly added to all of the important scenes he wasn't in earlier.

It's equally as miserable as every other story in the series.

Reina No Unmei
Reina's Fate is a spin-off sequel following Reina's life after the original story. There are unmarked spoilers for the original.