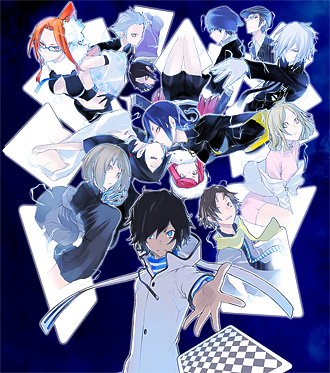 All the stars in the sky are (Not) our enemy
The darkly prospering days of man have reached an end.
You who have strayed from the cycle of the stars will leave not a trace of your existence.
But fear not. You will no longer feel anything...
— Quote from the Game Over screen
Advertisement:

Devil Survivor 2 is the sequel to the Shin Megami Tensei Spin-Off game Devil Survivor, developed by Atlus. It released in Japan on July 2011 and in North America on February 28, 2012.

20 Minutes into the Future, three Ordinary High School Students are heading home after a mock exam. They simultaneously receive a phone message from Nicaea, a "dead face delivery site" (in beta). The attached video shows a subway accident killing all three of them.

And then an earthquake derails the oncoming subway car.

Before the train hits them, Nicaea offers the students a chance to change their fate by becoming demon tamers. They agree, and after being saved by (and subduing) demons that appear from their phones, the trio return to the streets of Tokyo to find Earth is under attack by extraterrestrial invaders called the Septentriones. Opposing the aliens is JP's, (Japan Meteorological Agency, Prescribed Geomagnetism Research Department), whose charismatic leader enlists their aid but also knows more about what's going on than he should.

Devil Survivor 2 expands on the first game's demon roster and grants a second level to their racial skills. Like the Social Link system in Persona 3 and Persona 4, the new Fate relationship system grants allies bonuses and unlocks new demons as your friendship deepens.

. Tropes from the anime can be found here.

Devil Survivor 2: Record Breaker is an enhanced Nintendo 3DS port of DeSu2. In addition to a complete voiceover of the original game, it adds a new story arc with a second set of alien invaders, a new cast member named Miyako Hotsuin, and (Japan only) a crossover where Durarara!! characters cameo as demons.

Compare and contrast Neon Genesis Evangelion and Pokémon Sun and Moon.Seriously! Teenagers fight off Eldritch Abominations, on behalf of a secret organization that's led by a cruel genius with a hidden agenda.