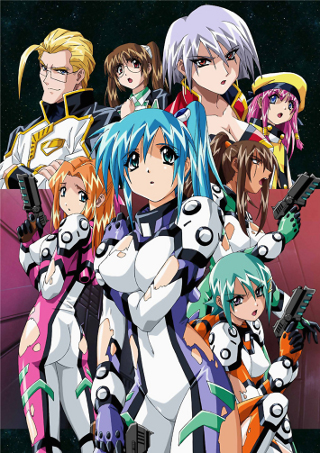 A 13-episode anime series developed by RADIX and initially broadcast in 2003.
Advertisement:

The plot is a bit difficult to wrap your brain around. In 2017, Earth satellites detect a gravitational anomaly coming from the direction of the constellation Lyra. When the signal is analyzed, it's revealed to be a transmission from the Voyager spacecraft, leading to the discovery of faster-than-light travel as well as a wormhole inside the core of Saturn's moon Titan. Others are soon discovered. Further exploration of these wormholes, or "inflation holes," results in the discovery, in the year 2197, of a planet ten parsecs from Titan which is dubbed the Quantum Core, which contains a wormhole identical to Titan's at its center and was apparently once occupied by a now-extinct alien species whose excessive use of wormhole travel resulted in the equatorial mass of the Core being burned away, leaving it in the shape of...well, an apple core.

Within 50 years, humanity has constructed a base on the Core, dubbed Watcher's Nest. Not long after, an expedition beneath the planet's surface is attacked by a Ghoul - your garden-variety Eldritch Abomination, origins and intentions unknown. The purpose of Watcher's Nest is now twofold: Monitor the Core, and prevent any further incursion from the Ghoul. Autopsies and genetic research conducted by a group called Alchemy reveal startling results when Ghoul genes are combined with animal DNA — and later with human DNA, resulting in the project being officially closed down.

Now a new squad of cadets is brought on board Watcher's Nest to experience combat training, conspiracy and absurdly tight uniforms. Misaki, our heroine, is hardly cut out for the job — but trouble seems to find her, and she's being observed by parties unknown....

The original series was followed by a second 13-episode series, Divergence Eve: Misaki Chronicles, in 2004. With the same set of characters and set in an alternative universe, Misaki Chronicles is about the elite team at Watcher's Nest defeating Ghouls at different times in Earth's history.