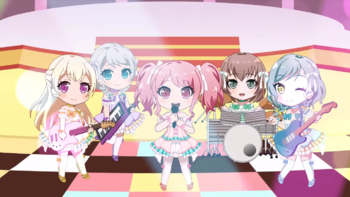 Shuwa-shuwa, dre-dreaming, yeah!note From left to right: Chisato, Eve, Aya, Maya, Hina.
Pastel Life is a spinoff animation series in the BanG Dream! multimedia franchise, which started in May 2018.
Advertisement:

The series consists of short 3-minute animations that focus on the daily lives of Pastel*Palettes, one of the five bands featured in the spinoff game BanG Dream! Girls Band Party!. There's Aya Maruyama, the ever-optimistic vocalist, Chisato Shirasagi, the former child actor turned bassist, Eve Wakamiya, the half-foreign keyboardist with a love for bushido, Hina Hikawa, the guitarist who can be a bit too brutally honest at times, and Maya Yamato, the socially awkward drummer with an extensive knowledge of audio equipment.

The entire series can be watched on the official BanG Dream! YouTube channel here

, with subtitles available including in English.