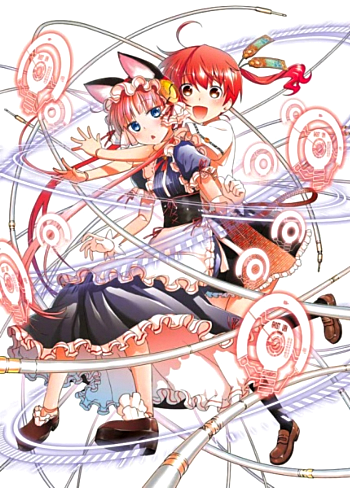 Nene (right) and Cla-rin Clarion.
It is a time when the world is frequently ravaged by huge natural disasters. A time when members of the general public in technologically-advanced nations began to acquire cyborgs and autonomous robots. In this era, as larger nations engage in cutthroat competition for technology and resources, the gulf between the rich and poor widens. And in this time... something else happens that has nothing to do with any of that. A story begins in which GIRL MEETS GIRL.
Advertisement:

Nene Nanakorobi, a full-body cyborg girl, is moving to Cenancle Island to live with her aunt. While on the cruise heading to the island, she meets the eccentric scientist Uzal Delilah, and her long-suffering "assistant" Clarion, another full-body cyborg. When terrorists attack the island however, Nene finds herself helping Uzal "defuse" the situation, thanks to being given access to the Pandora device housed in Clarion's body.

At the end of all this, Nene finds herself as Clarion's new "owner"... And she hasn't even managed to find her aunt's home yet!

Illustrated by Koshi Rikudo (of Excel Saga fame), Pandora in the Crimson Shell: Ghost Urn (紅殻のパンドラ / Koukaku no Pandora) is a cyberpunk action comedy manga based on an unused concept of Masamune Shirow (designs of which would eventually be re-used in Ghost in the Shell: Arise). It was serialized in Kadokawa Shoten's Newtype Ace magazine, before being moved to Niconico Ace, and is licensed in English by Seven Seas Entertainment.

An anime adaptation by Studio Gokumi was first shown as a movie in theaters on December 2015, before being formally aired during the Winter 2016 Anime season. The anime formally adapts seven and a half volumes (nearly all published material by that point in time) of the manga.