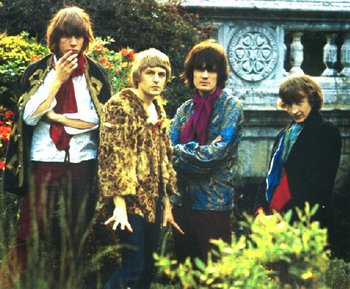 Soft Machine (initially called The Soft Machine after William S. Burroughs' novel) was/is a British band founded in 1966 by Daevid Allen (guitar), Kevin Ayers (guitar, bass, voice), Mike Ratledge (keyboards) and and Robert Wyatt (drums, voice), as an offshoot from The Wilde Flowers, the first Canterbury Scene band. True to its roots, Soft Machine initially played Psychedelic Rock as heard in their first album and singles. After Daevid Allen was barred from returning to the UK after a tour in France (thus being cut off the band) for overstaying his visa in 1967, Kevin Ayers dropping out in 1968 and being replaced by Hugh Hopper, Soft Machine began to quickly drift towards jazz-rock. The transition took place during their second and third albums (aptly called Volume Two and Third), and adding horn players to the ensemble, including saxophonist Elton Dean.
Advertisement:

Robert Wyatt's vocal and composing abilities had been relegated to only one song in Third and completely dropped in their fourth album (called, you guessed it, Fourth), after which he left Soft Machine. From 1971 to 1973, the band suffered serious line-up changes (such as Robert Wyatt, Elton Dean, and Hugh Hopper leaving) and newcomer Karl Jenkins (saxophone, oboe, keyboards) replacing Mike Ratledge as main composer and bandleader. As a result, their albums from this period (Fifth, Six and Seven) sound somewhat stale and uninspired.

In 1973, after releasing Seven, Soft Machine switched record labels from Columbia Records to Harvest Records, and recruited guitarist Allan Holdsworth to record their next album, Bundles. By then, Jenkins wrote the bulk of the songs. In 1976, Ratledge left the band during the recording sessions of Bundles. He was the last founding member of Soft Machine.

In 1978, Soft Machine disbanded. Jenkins regrouped the band in 1980/1981 to record their last studio album, Land of Cockayne, only for it to disband once again. It spawned an offshoot called Soft Machine Legacy that later changed its name back to Soft Machine. The band continues to tour and, after decades without a new studio album, unexpectedly released a new album called Hidden Details in 2018 to considerable acclaim.

An absolutely colossal number of people have been members of the band throughout the years. A young guitarist named Andy Summers was briefly in the band, but did not make any recordings with them. Roughly ten years later, he was in a band called The Police that achieved worldwide stardom almost overnight. Renowned jazz fusion guitarist Allan Holdsworth also spent some time in the band in the mid-seventies and shows up on the album Bundles. Daevid Allen did not spend much time in the band, but shortly after his departure, he founded his own Cult Classic band, Gong. Kevin Ayers and Robert Wyatt both had Cult Classic solo careers after leaving Soft Machine.

For more information, check That Other Wiki's page about them here