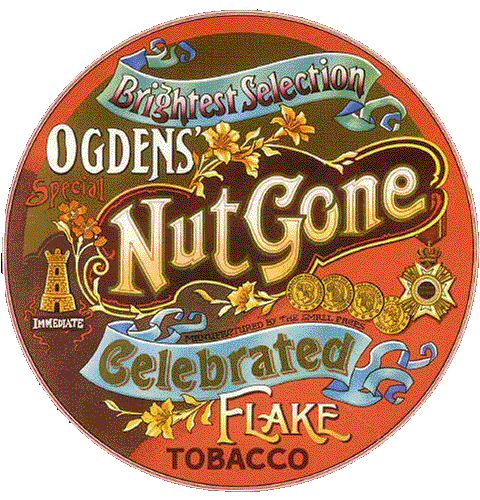 I will sing it a deep joy of a songload in your eardroves
"The Small Faces had already shown a surprising adaptability to psychedelia with the single "Itchycoo Park" and much of their other 1967 output, but Ogdens' Nut Gone Flake pretty much ripped the envelope."
— Bruce Eder, Allmusic

Ogdens' Nut Gone Flake is the third studio album by The Small Faces, released in 1968. This album has become one of the seminal works of Psychedelic Rock, breaking new ground with the innovative, if impractical, circular sleeve and in turning the whole of the second side to a whimsical Fairy Tale with spoken narrative interspersed with song, telling the tale of Happiness Stan and his search for the missing half of the moon. The band originally approached Spike Milligan to speak the narrative but when he turned them down they turned to the veteran radio entertainer "Professor" Stanley Unwin whose trade mark was Unwinese, or "Basic Engly Twenty Fido", a surreal and mangled form of English inspired by Lewis Carroll's Jabberwocky. The first side is a mixture of hard rocking, Music Hall and East End pub knees-up.