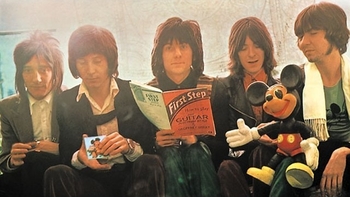 Faces are an English Rock & Roll group that formed in 1969, as an offshoot of The Small Faces.

They recorded four very popular albums and released a few hit singles, before encountering some internal dissension, with accusations that Stewart was keeping all of the best new material for his own solo career. Lane, who'd been one of the original founders of The Small Faces, quit in 1973. Tetsu Yamauchi took over on bass, but Lane's songwriting and singing capabilities were missed, and their studio output with Yamauchi was limited to two non-album singles. After an abortive attempt to record a fifth album, the band finally split up for good in 1975, spurred on by Stewart's decision to move to California and Wood making guest appearances with The Rolling Stones (he'd become a full member in 1976). McLagan kept busy as a sideman, including a stint with the Stones, while Jones went on to have one of the most challenging cases of Tough Act to Follow when The Who chose him to replace the late Keith Moon on drums.

Noted for their influence on Punk Rock and Britpop, the group was inactive for over thirty years in spite of several near reunions that never quite got the whole line-up back together. They finally reformed in 2009 with bassist Glen Matlock replacing the late Ronnie Lane (and Bill Wyman, who had been filling in for previous reunions) and lead vocals were handled by Simply Red lead singer Mick Hucknall. Ian McLagan sadly died from a massive stroke on 3 December 2014, but this did not stop a reunion with Rod Stewart from happening in 2015, to wide critical acclaim.

"I don't need no one's opinion on the matter concerning my Tropes":