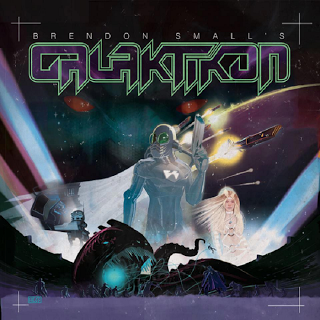 It sounds as awesome as it looks
Advertisement:

Brendon Small's Galaktikon is a "high-stakes, intergalactic extreme rock album" released in 2012 by Brendon Small, creator of Metalocalypse and Home Movies. It chronicles the adventures of a recently divorced space superhero named Triton who must rescue his ex-wife from his arch nemesis, a villain named Beastblade.

A second album, Galaktikon II: Become The Storm, was released in September 2017, and both the content of the song lyrics and statements from Small strongly imply that the album is not just a follow-up to the previous one, but also the Writing Around Trademarks Grand Finale to Metalocalypse, which was never televised due to a bad case of Screwed by the Network, though this is no longer the case with an announcement of a true finale movie.

Trope Orb and the Kill Pool:

Become The Tropes: note The soundtrack had been released with 2 list orders, one follows the story of Triton and the other for Dethklok. Thus, the tropes will follow the story of Dethklok tongue-in-cheek unless stated otherwise. As such, spoilers abound for the Metalocalypse series

Nathan Explosion: "There's nothing that needs mending. Just follow my words, they will lead you to the ending."