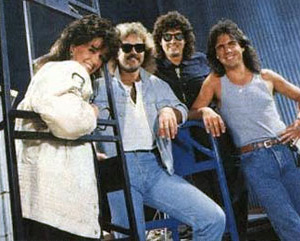 This band released three somewhat synth-heavy albums in the mid to late 1980s and had three number one singles with "We Built This City", "Sara" and "Nothing's Gonna Stop Us Now", the latter of which was famously used in the film Mannequin. Though generally critically reviled, they were quite successful commercially nonetheless. However, this band turned out to have less staying power than its two predecessors. David Freiberg left during the making of their first album (Knee Deep In The Hoopla, 1985), Pete Sears, after realising what the hell he was doing there (literally) left in 1987, and Grace Slick left the following year. With Mickey Thomas as the sole lead singer, they gradually disintegrated until they broke up in 1990. Notably in 1989, Donny Baldwin was sacked after assaulting Thomas to the point where Thomas had to have facial reconstruction surgery and plates implanted into his skull.

However, around the same time Paul Kantner reformed Jefferson Starship, Mickey Thomas chose to reform Starship. Briefly known as Mickey Thomas's Starship, they quickly settled on Starship Featuring Mickey Thomas, a clear indication of Thomas being the band. With a revolving-door line-up, Starship continues to tour today. Guitarist Mark Abrahamian tragically died of a heart attack after a concert in 2012, and Starship released their first album in over 20 years with Loveless Fascination the following year, to extremely positive reviews.