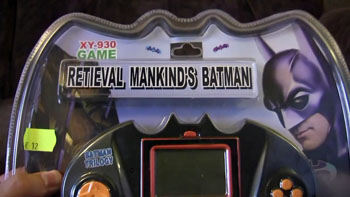 "I can't even hazard to guess as to what they were trying to say with that title..."
"Babbity Rabbity and her Cackling Stump is the stupidest title ever written by man or beast and of course when I wrote it, I never — I had not, at the point, when I gave Ron that title, I didn't imagine for a second that I was actually going to write the story."
— J. K. Rowling, on combining this trope with Defictionalization.
Advertisement:

The persistent practice of using titles that look like someone mashed together random words lifted out of an English dictionary. At worst, they will be as meaningless as "Super Punk Octo Pudding Gas Mark Seven", and at best, they will just cryptically allude to the show's premise or characters while trying to make a clever Western pop-culture reference. Basically, Gratuitous English (or whatever language the work was originally made in) as applied to work names.

Contrast with Exactly What It Says on the Tin, this trope's direct opposite. See also Non-Indicative Name, for characters and in-story objects with similarly unintuitive names, albeit ones that still carry meaningful communicative significance; and Never Trust a Title, for titles that are grammatically sound, but misleading. Related to I Thought It Meant. For an example of a "TV Tropes" title that follows this formula, see Ninja Pirate Zombie Robot. Frequently results in an Long Title.

The extreme version of this trope is the Word Purée Title, when even the words themselves are garbled or made up.

Not to be confused with Colon Cancer or In Which a Trope Is Described. Mad Lib Thriller and Fantasy Titles follow a set of rules that may or may not be this.

The following company has its own page:

Examples That Make Sense in Context

Examples that Make Just as Much Sense in Context: