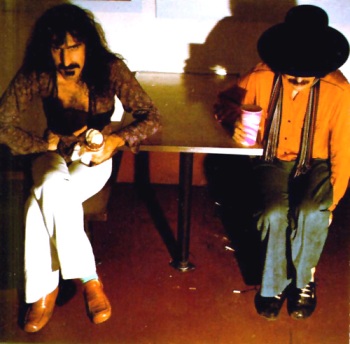 Music from the other side of the fence...
Advertisement:

Bongo Fury is a 1975 live collaboration album by Frank Zappa, Zappa's band The Mothers of Invention and Captain Beefheart. The album was made when Beefheart's career was in the dumps. His former albums hadn't sold well and even an attempt to go commercial failed miserably, causing even Beefheart himself to disown himself from the material. On top of that he was in a position where he couldn't record or tour without causing contractual problems. So Zappa helped his old high school buddy out by taking him on tour. The result of their collaboration was the Live Album Bongo Fury.

For fans this was the long anticipated collaboration between two giants of avantgarde rock. Expectations were high, maybe too high, because the album felt disappointing to most, despite some fan favorites like "Advance Romance" and "Muffin Man". Nevertheless this was reportedly the favorite Zappa album of Czech President Vaclav Havél, who tried to name Zappa his Cultural Ambassador in 1990.