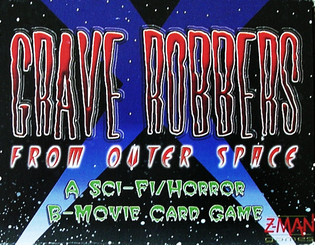 What's that, Skippy? Grave Robbers From Outer Space has its own TV Tropes page?
Advertisement:

Grave Robbers from Outer Space is a card game released by Z-Man Games spoofing the making of low-budget horror movies. The idea is to have the highest Defensive Strength when someone plays a Roll The Credits card or the draw pile is empty. Defensive Strength is increased by playing Character (such as The Prom Queen or The Aged Vampire Hunter) cards into your "movie" and giving characters Props like The Chainsaw or Big-Ass 'Fro, and from Location cards (The Funhouse, Camp Lake Zirconia, etc.) Other players try to lower each others' defense by killing characters with Creatures (Dracula, Demonic God Up to No Good, Killer Vegetables, etc.), negative Locations, and using Special Effects cards that can be used to perform things like doubling a Creature's strength or destroying another player's Location.

Basically if someone made a card game based on this wiki, this would be it.

The series is made up of nine games, each covering a different genre of movies:

A Kickstarter campaign to fund a new run of the game in 2015 sadly failed to meet its goals.