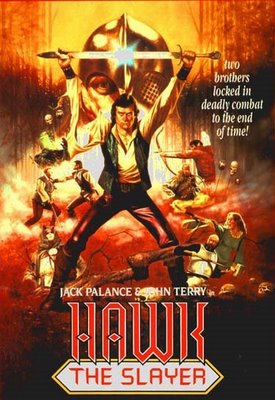 "Then Voltan will see who is the lord of the dance!"
"I am no messenger, but I will give you a message. The message of death!"
— Drogo
Advertisement:

Hawk the Slayer is a fine piece of nonsense set in the world of Dungeons & Dragons-inspired Heroic Fantasy, a place where longswords, short bows and daggers are swiftly drawn, leather, chainmail and a kind of cloth notable only for its brown-ness remain fashionable and there's always an evil one roaming about. The evil one in this adventure is Voltan (Jack Palance), who's so very evil on account of him bearing a scar on his face that, as we're told by a mysterious figure who lives within a mountain, will not heal. Quite whether the scar came before the willingness to do evil is something that Hawk The Slayer makes clear (Hawk's beloved stuck a torch in Voltan's face during a flashback) but he is quickly doing all manner of terrible things, all of which seem to involve murder. Indeed, the film opens with Voltan murdering his own father as well as the woman intended to be the wife of his brother.

That brother is Hawk (John Terry), who arrives too late to save his father but in time to hear the prophecy that he had been guarding and which had seen him slain by his own son. As he dies, Hawk's father gives him a magical sword (which Voltan had desired) and the two are set on a path that will see them face one another in battle. When Voltan breaks into a convent and kidnaps the Mother Superior, a one-handed man with an Automatic Crossbow seeks out Hawk. Hawk comes to the rescue of the Sisters of the Holy Word, promising not only that he will raise the two thousand pieces of gold but will defeat Voltan. Carrying his sword before him, Hawk sets out to gather a band of warriors...

The film, though not a big success when released in 1980, has become a Cult Classic since. Such attention has even has served as fuel in still continuing efforts to make

was released in 2000 AD, written by Garth Ennis and drawn by Henry Flint.

The film received the RiffTrax treatment in Oct. 2014.