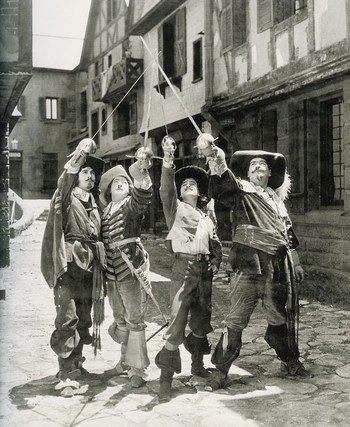 The Three Musketeers is a 1921 film starring Douglas Fairbanks, directed by Fred Niblo.

Gascon D'Artagnan, a young idealist looking for adventure, arrives in Paris to join King Louis XIII's elite military force, the Musketeers. He is taken under the wing of three of the best Musketeers, Porthos, Athos, and Aramis. He also finds love with beautiful Constance (Marguerite De La Mott), lady-in-waiting to Queen Anne. Meanwhile, there are conspiracies afoot. Specifically, evil Cardinal Richelieu is plotting with Femme Fatale Milady de Winter to bring down Anne, who is Richelieu's chief rival in exerting power and influence over the king. His scheme is to sow doubt into the king's mind regarding Anne, and specifically her not-so-former suitor, the English Duke of Buckingham.

One of many many adaptations of the famous novel The Three Musketeers. Fairbanks reprised the role of D'Artagnan in this film's sequel, The Iron Mask, which turned out to be his last silent film.