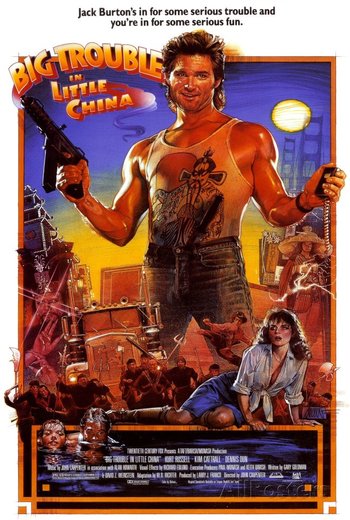 "You people sit tight, hold the fort, and keep the home fires burning, and if we're not back by dawn... call the president."
"I'm a reasonable guy, but I've just experienced some very unreasonable things."
— Jack Burton
Advertisement:

Big Trouble In Little China is one of John Carpenter's greatest films, written by W.D. Richter (of Buckaroo Banzai notoriety) and released in 1986.

Kurt Russell is Jack Burton, a long-haul trucker with a penchant for making soliloquies over the CB. He's in San Francisco's Chinatown to meet his buddy Wang Chi (Dennis Dun) and pick up Wang's fiancee Miao Yin (Suzee Pai) from the airport, but Evil Sorcerer David Lo Pan (James Hong) kidnaps her with the help of his Wing Kong street gang and his henchmen, the Three Storms.

Subverts a few tropes of the action hero genre. Most notably, as stated by both Carpenter and Russell in the DVD commentary: "This is a movie about a guy who thinks he's the Action Hero when he's really the comic sidekick."

The story continues in the Big Trouble in Little China comic series by BOOM! Studios, the first issue of which arrived on June 4th, 2014.

Don't confuse this with Chinatown. Hilarity will not ensue.

A reboot has been announced, with Dwayne Johnson in the lead role. While initial news suggested that Johnson would be playing Jack Burton in a remake, later news indicated that the film being planned is actually a sequel set in the same world.

You can tell James Hong had fun playing this role.

You can tell James Hong had fun playing this role.