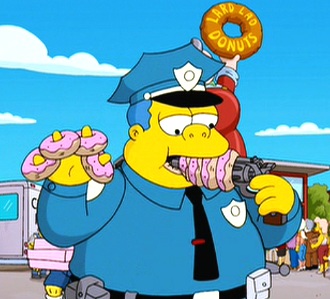 Guns don't kill people, doughnuts kill people.
Rocko Dillon: [fires a gunshot into the air to silence the audience] Freeze, and nobody gets hurt!
[a guy falls from the rafters into the orchestra]
Rocko Dillon: Well... from now on!
— The Naked Gun 33 1/3

Frequently results in Amusing Injuries from gunshot wounds or a superficial case of Ash Face. Caused by whichever combination of Artistic License – Gun Safety, Reckless Gun Usage and Shur Fine Guns would maximize the laughs. When gunshot wounds are used seriously, that's I Just Shot Marvin in the Face. See also Remonstrating with a Gun.

Not to be confused with Cartoon Juggling, though actually juggling loaded guns in any cartoon (or Real Life, for that matter), is probably just as bad an example as any of these following examples. Also not to be confused with Juggling Dangerously, though juggling loaded guns would in fact be an example of that trope. Subtrope of Too Dumb to Live.