Film / Pirates of the Caribbean: On Stranger Tides 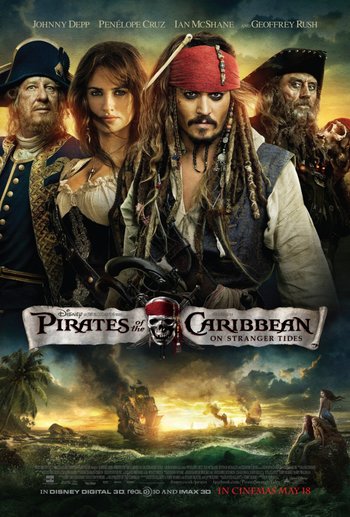 On Stranger Tides (2011) is the fourth movie in the Pirates of the Caribbean franchise.

The fourth installment (Suggested by... the novel of the same name, which was also an inspiration for the Monkey Island series) sees Captain Jack unwillingly joining forces with the notorious Blackbeard to seek out the Fountain of Youth, racing the English navy (led by Barbossa, who has turned privateer) and the Spanish (who have found a map made by Juan Ponce de Leon

). The situation is complicated by the presence of Angelica, a woman from Captain Jack's past (who, unlike all the other women in his past, still seems to mean something to him).