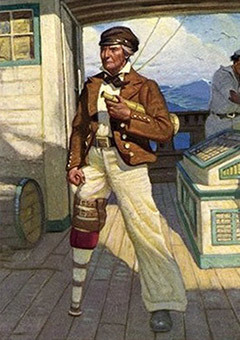 Up comes Tim without any legs,
And in their place he had two wooden pegs:
"Well was it walkin' upon the sea
Wore your two fine legs from the knees away?"
— My Son Tim, Irish traditionalnote As sung by John Francis Flynn and others
Advertisement:

An iconic trait of seamen of all kinds, be they pirates, sailors or fishermen, is to have a wood (might also be metal, bone or some other material) stump in place of one of their missing legs, which they probably lost to a shark, whale, crocodile or other aquatic hazard somewhere. As would be expected of any character that lives a dangerous life at the sea, expect said characters to be Badasses, often of the retired variant.

This was Truth in Television as several pirates, privateers and admirals had those during the modern era. Before the invention of antibiotics in the early 20th century, a broken or otherwise injured limb would often become infected. It was therefore common practice to amputate. Unlike the stereotype, however, a character with a wooden leg would most often become the ship's cook, as the peg leg meant he couldn't climb the rigging anymore.

A form of Artificial Limbs and a typical feature of a character that is Dressed to Plunder. A Sister Trope to Hook Hand.