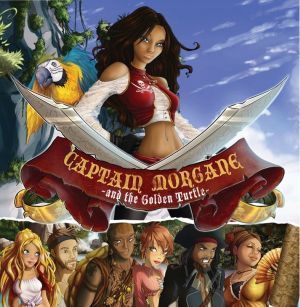 Captain Morgane and the Golden Turtle is an Adventure Game developed by French studio Wizarbox. It's centred on Morgane Castillo, a Pirate's daughter who is given acting command of her father's ship while in pursuit of a legendary treasure: the Golden Turtle.
Advertisement:

The game is technically a Spin-Off and prequel to So Blonde, as the protagonist of that game met Morgane during her adventures. However, no knowledge of the earlier game is needed, and people who don't know that it's a spin-off may not even notice.

The game was released in 2012 for PC (available on Steam), Playstation 3, Wii, and Nintendo DS.