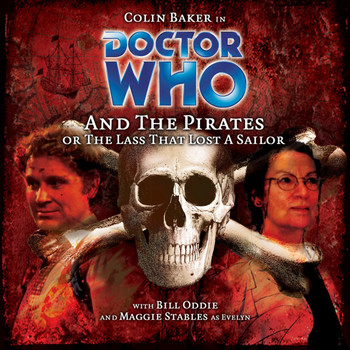 Properly titled "Doctor Who And The Pirates or The Lass That Lost A Sailor".

One of the most well-loved Big Finish Doctor Who episodes, and certainly one of the Sixth Doctor's most popular episodes ever made. The (intentionally awkward) title is a parody of both "Doctor Who And The Silurians" and H.M.S. Pinafore or The Lass That Loved A Sailor.

Sally, a history student, is having a hard time, and the last thing she wants today is for her favourite tutor, Dr. Evelyn Smythe, to turn up and tell her a long, rambling story about pirates.

But Dr. Smythe won't be dissuaded. In fact, she even invites her friend and travelling companion, the Doctor, into Sally's apartment so they can take turns with the pirate story. Evelyn insists the whole story is true, even though Sally points out that it's a transparent Self-Insert Fic set in a mess of pirate cliches.

As the story goes on, though, Sally starts to see some uncomfortable similarities to her own life. In particular, to a very recent, very painful, very personal loss... someone very dear to her was killed in a car crash. Sally was driving. And she doesn't think she can go on.

The pirate story starts getting darker, too, so the Doctor decides that the only way to cheer them all up is... to turn it into a musical! A Gilbert and Sullivan one, to be exact.

The story deals with a pirate captain named Red Jasper, who's after a map leading to a treasure. A cabin boy named James London (Jem for short) turns out to be the son of the only man who knew its location. Evelyn and Jem are captured by Red Jasper, and despite Evelyn's best efforts to bluff her way out (posing as "Evil Evelyn, the Pirate Queen"), Jem is tortured and brutally murdered. Evelyn blamed herself for his death, and asked the Doctor to take her home after the adventure was over. When she got home, she found Sally's suicide note in the mail. She asked the Doctor to take her back in time so they could talk Sally out of it.

Although Sally isn't sure what to make of the story in the end, Evelyn manages to explain to her that real life doesn't have a happily ever after — just good days and bad days. And that as long as one person cares, life is worth living.

This episode is directly followed by "Real Time". Which also makes this one the last time the Doctor wears his infamously horrible coat for some time.