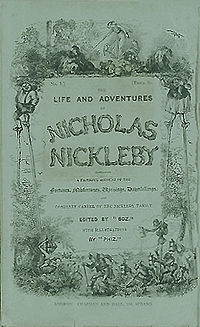 Charles Dickens' third novel, originally written in serial form, is about a young upper-middle-class man forced to support his mother and sister after his father's death and financial ruin. Grudgingly assisted by his uncle, Ralph Nickleby, the title character Nicholas finds work as a teaching assistant at Dotheboys Hall, possibly the most famous Boarding School of Horrors in the history of literature, and struggles with the moral dilemma of keeping his livelihood vs. standing up to injustice. Meanwhile, his sister Kate, working as a milliner and lady's companion, faces her own challenges in the form of demanding employers, jealous co-workers and unwanted male attention. Like many other Dickens novels, this story centers on the social conflicts of the time, especially child abuse and harsh working conditions, and relies on satire to get the point across; Wackford Squeers, the headmaster, seems too outrageous to be true until one remembers that Dickens based him on a real life Yorkshire schoolmaster named William Shaw.

The novel spawned several film and television adaptations, including one in 2002 with Charlie Hunnam as Nicholas, Christopher Plummer as Ralph, and Jamie Bell as Smike, with a supporting cast including Anne Hathaway and Nathan Lane, among others. It also was adapted into an incredibly faithful, 8.5 hour long stage production by the Royal Shakespeare Company in 1980. For those interested, that one can be watched here