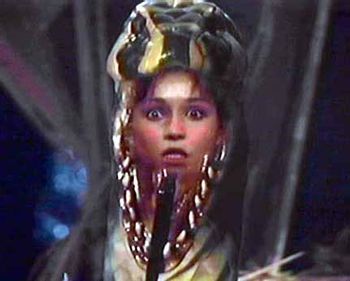 No! Bad snake! You spit her out this instant!
Dreams are important... never underestimate them.
— The Doctor
Advertisement:

The one with Doc Martin.

Uh-oh. Looks like Tegan isn't quite over her encounter with the Mara, the mind-controlling snake god from "Kinda". Not long after they land on Manussa, the planet of really pretty unisex dresses, she starts having sinister snake-themed dreams. The Doctor realises that Mara might still be alive, not in a physical form but one that exists inside Tegan's mind.

While the Doctor explores the capital of Manussa, the Mara breaks free of the Doctor's blocking device (essentially a fancy iPod) and starts guiding Tegan's body through the city, which is busy celebrating the 500-year anniversary of the Mara's defeat (presumably to be followed by the Festival of Irony).

Meanwhile Lon, the fabulous local prince-equivalent, spends his days lazily ignoring the Mara myth and pretty much all of his other duties as well. While his mother Tanha and local historial Ambril instruct him about the upcoming ceremony, he takes an interest in the Doctor, who rushes in to explain that the Mara's still very real and about to destroy the whole world. Of course, the Doctor fails to impress anyone, and he gets to spend much of the story locked up in a fancy cell. Nyssa, roaming through the palace in a new outfit, is eventually locked up together with him.

However, once Lon is lured in by the Mara-as-Tegan and possessed by the snake as well, Ambril's assistant Chela realises that the Doctor is speaking the truth and sets the Doctor and Nyssa free again. The three of them visit Dojjen, Ambril's predecessor, who has retreated to a life in the desert to contemplate the Mara's mysteries. Dojjen gets the Doctor magnificently stoned on hallucinogenic snake venom and, while tripping, the two devise a plan to defeat the Mara once and for all.

One random puppet show later, Lon changes into his fanciest of fancy dresses and prepares to lead the traditional ceremony. However, the Mara inside him insists on using the actual legendary great crystal, instead of the glass prop, and Ambril (with the promise of getting shiny archaeological trinkets in return) recluctantly brings it along to the show. It's used, of course, to bring the Mara back to life, but the Doctor and Dojjen use their combined psychic energy to will it into submission. Free of the Mara's possession, Tegan is left trembling and crying in absolute horror while the Doctor just holds her.

This is Steven Moffat's favourite story from the classic series.