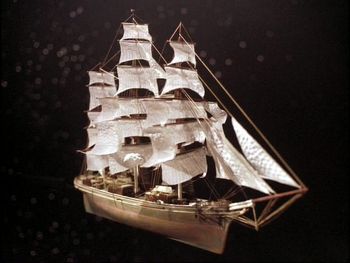 The one where GOD HIMSELF comes back. Also the one where Tegan looks fabulous in a dress.

After receiving a garbled message from the White Guardian (and almost blowing up the TARDIS in the process), the Fifth Doctor, Tegan and Turlough are taken by the TARDIS to what appears to be an Edwardian sailing ship. The Doctor and Turlough find out that the sailors have absolutely no idea how they came aboard the ship nor who their captain is. (But they got paid in advance, so don't give a damn.)

Meanwhile, Tegan is left in the TARDIS in case the White Guardian sends another message. He does: they have to make sure someone "does not win" and it's "winner takes all". But before she can get to the Doctor with this urgent information, she runs into the ship's handsome but creepy first mate, Marriner, who tells Tegan in an equally creepy voice that he will take her to her friends. The four of them eventually meet in the bridge, where the Doctor looks at the ship's map just in time for the show's first cliffhanger: the ship is actually a spaceship, and it's racing with other period Earth ships through the solar system. Because it'd be cool, that's why. The prize: Enlightenment!

The officers of these ships are Eternals, mind-reading beings who exist above and beyond our universe. They've lived so long that they have no original thoughts of their own, and must read the minds of mortals ("Ephemerals") in order to alleviate their soul-crushing boredom. Having Enlightenment will ensure that they will never be bored again. The Doctor uses a viewscreen to look at another captain and notices he's wearing an out-of-period red jewel that is very important to the plot so pay attention. The ships round Venus, and Striker's ship edges so close to the planet in an attempt to get ahead that the ship's almost destroyed. The other captain's ship comes so close that it actually is destroyed. The Doctor, as always, thinks something more sinister is at hand.

Tegan, Turlough and the Doctor go up to the deck and Turlough suddenly goes apeshit. The Black Guardian is not happy that Turlough failed to murder the Doctor, and his disembodied voice tells him he will remain on the ship forever, in "perpetual torment". Turlough shouts "NO! I WILL NEVER SERVE YOU AGAIN!" and jumps overboard.

A badly-yellowscreened net saves him and he's taken aboard another ship, led by the ruthless and hammy Captain Wrack. He manages to convince her that he's on her side and wants to share the prize, and due to his "devious" and "confused" mind Wrack has difficulty reading it. Wrack sends her first mate (played by hammy pop star Leee John) to present Captain Davey (another competitor) with a jewelled sword and to deliver party invitations to the other captains. Striker refuses the invitation, but the Doctor accepts, wanting to retrieve Turlough.

Meanwhile, Davey's ship explodes. What a coincidence! Tegan is horrified by Marriner's aloof reaction to all the "Ephemerals" who just died on that ship. She's able to shield her mind from him, anyway, simply by being extra grumpy, but it only serves to intrigue him more and he develops a creepy stalky crush on her in the process. Meanwhile, the Doctor puts two and two together and realizes that any ship that challenges Wrack's goes all explodey. On Wrack's ship, she reveals to Turlough how she does it: she goes to a vacuum-sealed chamber where she uses the Black Guardian's power to make the red jewel explode. Somehow.

The Doctor, Tegan and Marriner travel to Wrack's ship, where they mingle at a party while Turlough sneaks off to examine the chamber of explodium. He finds an eye-shaped grid (that looks amazingly like the CBS network's logo

◊) open to space, but a pirate locks the door and turns off the vacuum shield. Fortunately, the Doctor finds Turlough before he suffocates, but both are immediately captured. Wrack lures Tegan away from everyone else and momentarily stops time so that she can sneak a red jewel onto the tiara Tegan is wearing for the party.

Turlough turns on the Doctor again and Tegan, the Doctor and Marriner are sent back to the ship. The Doctor doesn't mind, for he believes that Turlough is trying to stop Wrack. He's right, and Wrack realizes it: she sentences Turlough to Walk the Plank. She pauses, however, when Turlough tells her that he, too, serves the Black Guardian and decides to let him watch her destroy Striker's ship. Luckily, the Doctor realizes just in time that Tegan's tiara contains the jewel. He thwacks it to pieces with an axe, and when that only makes it stronger, he throws it overboard before Wrack can destroy it. He travels in the TARDIS to the other ship to keep her from winning but is thrown overboard along with Turlough. Wrack wins!

Or does she? Well, it turns out that she and her first mate were the ones who were thrown overboard, not the Doctor and Turlough. They, along with Tegan, Striker and Marriner go to the Enlighteners to claim their prize.

They turn out to be everyone's favourite omnipotent, extradimensional beings who wear birds on their heads now for no apparent reason: the Black and White Guardians! The Doctor declines the prize, saying that no one should receive complete enlightenment, including him.

Striker leaves, along with Marriner, after the latter gets rejected by Tegan... again. But the White Guardian turns to Turlough, and says that since he helped the Doctor win, he's entitled to a portion of Enlightenment. As he reaches out to grab Enlightenment (represented here by a huge white crystal) the Black Guardian says that since the Doctor's indebted to him, Turlough can either have Enlightenment or give up the Doctor.

You can see where this is going.

Yes, he refuses Enlightenment and throws the crystal at the Black Guardian, who promptly catches fire because "light defeats darkness". The White Guardian congratulates Turlough, and the Doctor says that Enlightenment was not the diamond, but the choice. Cue credits.

This story marked the first script written for the series by a woman. Barbara Clegg would pitch two more stories to Eric Saward - they were rejected, but were ultimately produced by Big Finish as part of their Lost Stories.

This is also the final televised appearance of the Black and White Guardians and their ducky hats, though a character intriguingly similar to the Black Guardian — though minus the hat, and identified as "the Trickster" — turns up in The Sarah Jane Adventures. The Guardians, of course, return in the Doctor Who Expanded Universe, including Big Finish Doctor Who.