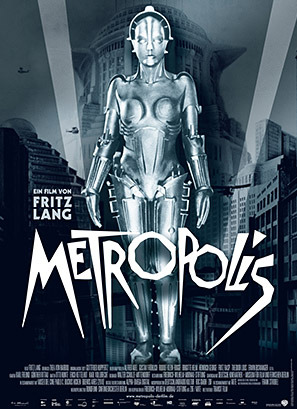 "Having conceived Babel, yet unable to build it themselves, they had thousands to build it for them. But those who toiled knew nothing of the dreams of those who planned. And the minds that planned the Tower of Babel cared nothing for the workers who built it. The hymns of praise of the few became the curses of the many."
— Maria
Advertisement:

Metropolis is a silent 1927 German sci-fi film directed by Fritz Lang. Considered one of the forerunners of the genre, it remains to date one of the most expensive films ever made. The plot follows a society divided in two, the workers underground and the wealthy on the exterior, how Freder, a member of the city's elite, falls in love with a worker's daughter named Maria and the class confrontation between them fueled by Rotwang, a Mad Scientist rival of Freder's father, city ruler Joh Fredersen.

Aside from its progressive storytelling, it is also known for being heavily fragmented, the results of both heavy Bowdlerization in its trip to foreign markets, and of poor preservation techniques back in the '30s (plus a little thing called World War II). For decades, up to 25% of the original footage was considered lost as a result. Several attempts have been made to reconstruct the film, most notably:

This Troperiffic film is either the Trope Codifier or possible Ur-Example for approximately 76.5% of science fiction tropes. Among many, many other things, it's the first movie to have a robot in it.note  Well, the first one to feature a clearly metallic, sentient robot, at least.

Not to be confused with the anime film of the same name, which does take elements from here as well as a manga by Osamu Tezuka, which was itself Suggested by..., but not adapted from, this movie.

Works it has inspired:

Trope Codifier, or Ur-Example for the following sci-fi movie conventions: 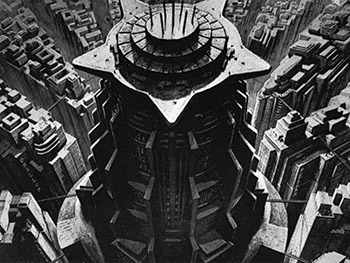 Consequently, many find that Metropolis Is Unoriginal: The film's tropes, characters, visual style, and special effects have been mimicked to the point of exhaustion. Ironically, on initial release, the plot was criticized for borrowing heavily from Victorian melodramas and other sci-fi stories; H. G. Wells in particular felt he'd been plagiarized

. So some of it may be even older than people think.