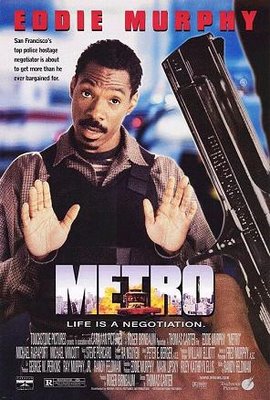 Metro is an action/suspense film from the year 1997.

Scott Roper (Eddie Murphy) is a San Francisco police negotiator with a gambling addiction and an ailing relationship with his ex-girlfriend Veronica. He becomes personally involved with a dangerous criminal Michael Korda (Michael Wincott) when his friend Sam is killed by him. He is also saddled with new partner Kevin McCall, whom he is supposed coax into a new police negotiator.

Has nothing to do with the Russian novel/video game franchise of the same name.