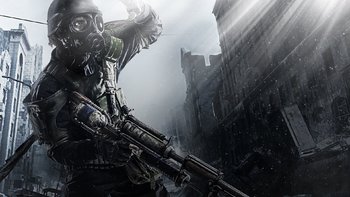 Metro (Russian: Метро) is a series of novels and video games, started in 2005 by Russian author Dmitry Glukhovsky's novel Metro 2033. The novel quickly became popular, and even managed to find an audience outside Russia, being translated into 34 different languages. Glukhovsky has since gone on to write two sequels.

The series takes place in the 2030s, twenty years after an apocalyptic nuclear war devastated the world. With the surface contaminated by radiation, the residents of Moscow have no choice but to live in the city's subway system. They have little in the way of supplies or technology, and must make do with what they have, enduring radiation, mutants, and their own fellow man.

The main entries in the Metro literature series:

In addition, dozens of spin-offs taking place in the same universe have been written by other authors.

Ukrainian game developer 4A Games has developed a video game adaptation of the series, which currently consists of three main games: