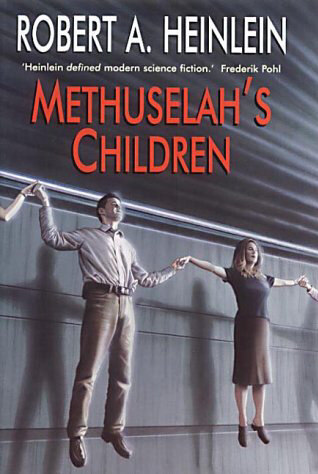 Methuselah's Children is a Speculative Fiction novel by Robert A. Heinlein first published as a serial in 1941 and expanded into a full novel in 1958. It is about a group of naturally long-lived humans who find themselves persecuted by 22nd century society for the (nonexistent) secret of their longevity and are forced to flee on humanity's first interstellar colony spacecraft. On the journey, they undergo First Contact and meet a number of weird alien species, eventually returning to Earth to find that society has invented its own longevity technology in their absence. The combination of rejuvenation technology, prolonged lifespans, and Faster-Than-Light Travel gives humanity the keys to colonizing the galaxy.
Advertisement:

Methuselah's Children also introduces the roguish Lazarus Long, the protagonist and instigator of many of the novel's schemes, who would later go on to become Heinlein's archprotagonist, appearing in every novel set in the "Future History" universe until Heinlein's death.