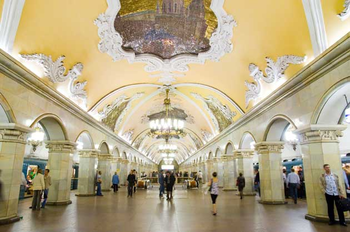 What are those two blue trains doing in here? What is this, Ringo's house?!

The world's busiest subway system and second only to Tokyo in the general rapid transit systems category, Moscow's Metro system is both an impressive feat of engineering and architecture. The plans for it sprang up back in the 1880's, but due to the city government hating all public works as a matter of principle, and ridiculously rich Moscow merchants being tightfisted about anything that wasn't fueling their ego, it wasn't until Stalin that work actually began (actually thanks to Lazar Kaganovich, then railways minister) in 1935, when both the funds and workforce were finally available. The deep underground tunnels and stations were explicitly envisioned as bomb shelters for the people of Moscow, and the wisdom of this move was proved during World War II, when most stations served as such, and some were converted to house various important military installations — like Chistye Prudy station that was an Air Defense HQ.

The system, far more underground than The London Underground, is best known for the station design (especially in the earlier stations, when lavishness of decoration was the point, and some recent stations), with its ornate arches, sculptures, murals, etc. It's Socialist Realism meeting urban transport and looking like a museum. Sadly, during the Khruschev's times, the architectural opulence was greatly scaled down, which led to the proliferation of the bland and boring, extremely utilitarian station designs popularly dubbed "Sorokonozhka" ("Centipede", but literally "forty-legged"), due to the unfortunate coincidence of the typical station having forty square columns on the sides. Fortunately, the architectural chic was gradually restored starting from 1970s, and new stations may be less Socialist Realist, but still as artsy as they get. Now the pendulum has swung again and new stations are all planned to be near-identical to keep the costs down (as opposed to individual designs in the past). We'll see.

The Metro is a lifeline for notoriously traffic-jammed Moscow, as it's often the only means to reliably reach the desired destination when major highways are jammed for hours, and any accident in the Metro leads to the city grinding a standstill. Fortunately, the accidents are pretty rare, and even The One Under is rarely a fatality — taking into account London's example, there's a deep trench between the rails on every station. It also has another feature based on the English experience — until recently there was exactly one station with a curved platform, and only recently the second one was built (both with quite large radius of curvature and not by choice), so the distinctive caution to mind the gap is simply unneeded there. It is replaced, however by another, no less iconic phrase: "Ostorozhno, dveri zakryvayutsya," or "Be careful, the doors are closing." Sometimes you can hear another phrase: "Be careful when leaving through last door of last car," because some stations are not long enough to fully guarantee that train will actually fit. However, the more common concern is that on some stations an extremely strong wind may blow from the tunnel, strong enough to knock down an unsuspecting person. Another interesting feature is that there are no fare zones — in contrast to most of the world's other subway systems (but, ironically, similar to most of the subway systems in the United Statesnote Doubling the irony, the Washington Metro is one of the few American subway systems that does have distance-based fares), the fare is flat and each and every trip costs the same amount (50 r. as of 2015 or ~$1) regardless of its length or number of transfers. The Metro uses smartcards as tickets, with 1, 2, 5, 10, 20 or 60 uses and limited lifetime (45 days for a 60-use ticket), unlimited-but-no-more-than-once-per-7-minutes replenishable plastic smartcards with 30, 90 and 365 days of use and recently added "90-minutes" tickets and "Trojka" smartcards doubling for use in the other city transportation. There are social monthly tickets and replenishable cards as well. In USSR times it used common coins (~$0.007 as of 1985), then inflation forced the switch to special tokens, then counterfeiting prompted the switch to magnetic cards and smartcards. The system has been under constant overuse for last 20 years, so many wish to stay in traffic jams rather use the Metro. Ironically enough, there are human-jams on hub stations at rush hours, though the travel time is much more predictable than above the ground.

Speaking of the rails, The Metro runs on the same wide gauge track (1520 mm) as other Russian railways, but uses a special rolling stock that is lighter, better suited to quick loading and unloading, and pretty bad for the overground running (there's only one line with a significant overground stretch in the whole system, so why bother?). In contrast with the London system, there's only one size of the rolling stock, as both surface-dug and drilled tunnels are built to the same spec. Old trains, which were designed and (mostly) built back in Soviet times, lack air-conditioning, relying instead on special scoops on the roofs, which make cars rather drafty when they are running, and positively stifling when they're not.note Actually the train design was based off pre-WW2 New York trains and hasn't changed much until 1980s. The introduction of new models was slow for a variety of reasons. New trains do have ACs though, but their reliability leaves much to be desired. They are gradually replacing the old ones since early 2000s and the process may stretch up to 2020. Given the enormous passenger load the system experiences most of the time, it's the major reason why riding a Metro can be a rather unpleasant experience.

There are 12 lines, which are designated by names, numbers and colors, and the lines tend to be referred to by their colors in the colloquial speech, except when the similarly colored lines may cause confusion (there are Green diameter, Lettuce chord and Emerald segment-that-may-become-another-ring) and in the case of the Ring line — it's never referred to by its color (brown), but always as "Koltsevaya" ("The Ring Line").note There's an old joke that the Ring Line exists only because Stalin placed his coffee mug on a map of the planned Metro network, leaving a coffee stain; at least some wags connect this to the "official" colour of the line. The lines are arranged in a wheel pattern, with seven radial lines running the city end to end being spokes, the intersecting grid they form in the city center constituting a hub, and Koltsevaya line, roughly corresponding to the Garden Ring along the edge of the city center, being the rim. There are also two shorter half-length radial lines, and since the plans of having the second ring to relieve the overloaded central grid are perpetually postponed due to the lack of funds, they are replaced by the ad hoc-built "chordal" lines, connecting the spokes outside of the ring, of which there are now two. Moscow Monorail is also often lumped here as a third chordal line (it is also run by the Metro company), but is actually a completely different affair, though there are efforts to better integrate it into the system. In 2016, the Moscow Railroad Ring, a pre-existing railroad that previously was used to move freight trains from one direction to another, was adopted for use of passenger rolling stock based on near-suburban trains. Legally, Moscow Metro is in charge of the line as a business object while the rail infrastructure is owned and operated by Russian Railway Company under a service contract.

Trains are very frequent, less than a minute apart during rush hour, and a supposedly horrendously long 7 minutes apart after midnight (stations open at 05:30 and close at 01:00 for maintenance), so no schedule is available to passengers — you'd never wait long enough to warrant it. Direction can be determined by the gender of the announcer (male for into the city or clockwise, female out or counter-clockwisenote As the saying goes, "Your boss calls you to work, your wife calls you home". Yep, we know...). It's also almost impossible to get lost there, as there's only one branch in the whole system, maps are plastered on every imaginable surface, columns equipped with a voice link to information bureaus and emergency services stand on every station, and signs showing where you can get from here abound — in fact, it is only second to the Tokyo subway in usability and usefulness of its signage. English signage is ubiquitous, and the robot announcer in trains nearly always repeats its announcements in English as well (though if the robot is broken and the human train engineer is doing the announcements, they will never be in English). One other thing that can sometimes be confusing is the exits. Most stations have two or more exits - some leading to the surface, others to long tunnels which lead to other stations, sometimes even crossing over each other. Taking a wrong turn can put you surprisingly far from where you wanted to go. However these passages are clearly marked (in Russian) - it sometimes just takes a minute to figure out what tunnel goes where.

There is also a widely believed-in (but officially denied) Urban Legend about a "Metro 2" system, deeper down, designed to evacuate key people from Moscow in the event of a nuclear war. Most stuff on this is on a "my brother's friend's aunt's friend worked there" basis and anything on this should be taken with a pinch of salt. However, many tunnels have spin-offs and some of them are not associated with any object on surface.

Metrorats (Метрокрысы Metrokrysy) are another famous urban legend about the metro, fueled by a series of entirely fictitious stories published by newspapers to boost ratings in the early 1990s. They are, reportedly, extremely big and smart rats at least 1 meter in size who live in metro tunnels and can eat people. The legend is so popular, that it became an ironical explanation for some stupid metro-questions — or a reason for an instaban on some forums. One of explanations for its origin is seeing a stray brown pit bull terrier in the times when the breed was near-unknown in the USSR.

There are also many stray dogs ("Metrodogs") that live in the system, and even use the trains to go from place to place.

In the past there existed some "ghost stations," that were built, but never used for passengers. Passengers still could see them from car windows, yet mostly without lights except from the train itself. The last full-sized ghost station was opened in 2014. Right now, only short evacuation chambers and unused platforms on some active stations remain in the "ghost" state.

There is as well a subculture of those who try to get to service areas: Metrostroy (parts of the system under construction), tunnels, and other places not meant for the general public. This requires some skills, special gear, and careful work, so even though it's annoying for personnel, such activities usually bring no harm.