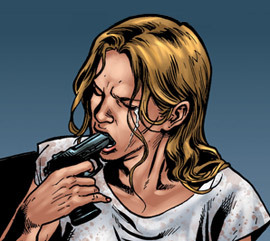 The world's least healthy diet.
Dwayne held the muzzle of his gun in his mouth for a while. He tasted oil. The gun was loaded and cocked. There were neat little metal packages containing charcoal, potassium nitrate and sulphur only inches from his brains. He had only to trip a lever, and the powder would turn to gas. The gas would blow a chunk of lead down a tube and through Dwayne's brains.
— Breakfast of Champions
Advertisement:

There are lots of ways to do yourself in: jump off a bridge, hanging, stick your head in the oven. One popular method in the USA and Hollywood is to wrap your lips around the barrel of your favorite firearm, and pull the trigger.note This being part of the reason why they have fewer suicidal and depressed people than all other developed countries - their average suicide attempt is about 50% lethal, versus less than 10% for the rest of the developed world (deliberate drug overdose having an average lethality of 2-3%, versus bullet to the brain at 90%+). This is because half their suicide attempts are with firearms, this rate also mirroring their rate of firearms-ownership (about half, versus 15% for Australia and less for countries like Poland where they don't have cane toads, rabbits, crows, dingos, foxes, and crocs to deal with). Funnily enough, despite the impression given by the many drive-by-shootings and school shootings it's actually suicide and not murder that makes up the majority of their 15,000 annual firearms-deaths. One obvious reason for this: not a lot of room for error. Of course, some people still survive the attempt, often by not actually aiming at their brain — even the woman in the page image isn't doing so.

Police officers really do not like these kinds of suicides. The result is always very messy and gory, and can leave nightmares to anyone who has to witness this kind of suicide happening, or its aftermath.

Someone who wants to give you the chance to do this will Leave Behind a Pistol and no, it doesn't mean edible firearms, or literally eating one - actual edible guns do exist,

Sadly, this trope is very much Truth in Television, and it is sufficient to say all Real Life examples are therefore redundant.

A Sub-Trope of Attack the Mouth (just the attacker is oneself).

As a Death Trope, the major part of the spoilers will be unmarked. Beware.