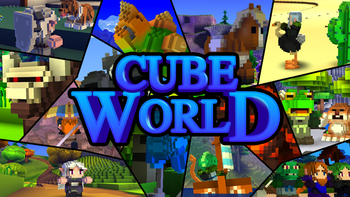 is a voxel-based game created by Picroma. Said to be inspired by Minecraft, Monster Hunter, The Legend of Zelda, and more, the game is an action-RPG sandbox that takes place in an entirely procedurally generated world. The alpha version was released in 2013 and had remained so for six years until September 2019 where the game's official launch date was revealed to be September 30th and launching on Steam. Those who owned the game on Picroma gotten Steam keys to access the beta, which launched on September 23rd.
Advertisement:

Not to be confused with the toy series Cube World by Radica Games of Mattel.