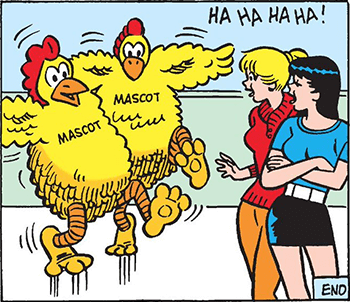 The aura of loserdom is exponentially enhanced if the mascot is a chicken.
Advertisement:

It's not easy being the mascot of a school sports team. While the Dumb Jocks and mean cheerleaders get all the attention, you're stuck wearing an itchy, stinky costume that really isn't designed for running around in a gym or field.

You may be the one pumping up the crowd, but you'll also be stuck on the sidelines, giving out high-fives and t-shirts while the real members of the team win the championship and get all the love. And it's not like you can just move up in the ranks, either, because chances are you only got the spot because you failed at tryouts — after all, who would want to be the mascot?

Well, if anyone's going to get stuck with the job, it's probably not going to be someone with any real social status or athletic ability. It'll be someone with no skills to bring to their team beyond running around like an idiot with their face covered; or at best, someone crazy enough to actually find the role fun, despite the mockery they'll doubtless receive. This of course means the person stuck in the mascot costume is likely to already be considered a loser, and if they've avoided that fate so far, getting the position will be what makes them a loser. It's a self-fulfilling prophecy: if it's the losers who play the mascot, then that makes the mascot a loser.

The natural habitat of the loser mascot is a high school or middle school setting, though they are occasionally found at the elementary or university level, or out in the wilds of professional sports.

In middle/high school, they're more than likely to get unwanted attention in the form of The Bully, be a source of embarrassment to their friends, and suffer humiliation that will last them the rest of their lives. Even if they're not actively mistreated (such as in works where High School Rocks rather than being hell), they're still not likely to be a treated as a "real" member of their team.

Whether luckily or not, people may not even know who is inside the costume... meaning that even if there's any genuine praise to be given for the mascot's performance — such as if their newfound anonymity grants them a confidence they lack while out of costume — the poor sap in the costume may still be considered a loser regardless, right at the bottom of the Popularity Food Chain.

Subtrope of Goofy Suit; Bad Job, Worse Uniform; and, of course, Mascot. Dreaded Kids' Party Entertainer Job is similar, but with kids' parties instead of sports.