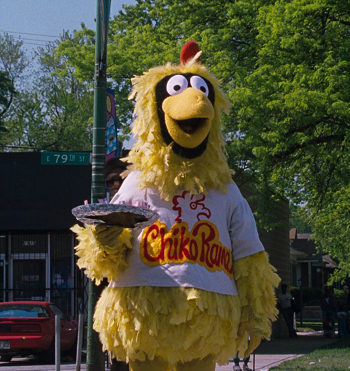 Might not look so, but this chicken is packing some serious heat

.
Joey: Well, I would invite my mom, but she's Goofy.
Jesse: Joey, that's a horrible thing to say about your mother!
Joey: No, she's really Goofy; she works at Disneyland.
— Full House
Advertisement:

Having to wear a "funny" costume.

According to television, the crappier your job is, the crappier the uniform is. So appropriately enough, the worst job in the world is to wear a cartoon-character suit, either at an amusement park, a children's birthday party, as a sports mascot, or wherever else you may end up doing this. Not only is it humiliating in and of itself, but children will regard you as a fair target for punches, buckets of paint, flying anvils, etc. Sometimes adults decide the same, and they bring out the heavy artillery (sometimes literally).

Employers never, ever mind if their mascot gets assaulted, presumably because beating up the guy in the goofy suit is one of the big draws that brings in the customers.

Getting sweaty and miserable under the suit is just extra trouble. In the worst cases, it's not even a job you get paid for, when you have to wear the suit due to a wager or some other reason. Even furries that may wear similar costumes (or "fursuits") for fun or convention appearances may not enjoy doing such a job like this.

Zig-Zagged in Real Life; Cracked listed it as a job that's harder than it looks.

These mascot costumes can weigh up to thirty pounds — not including the giant bobblehead — can reach temperatures of up to 113 degrees or higher, and seriously restrict the wearer's ability to see and hear (leading to accidents and injuries). As a result, unskilled labor such as clerks or janitors are rarely asked to wear them, and are instead usually assigned to people who are already fairly coordinated and in good health — in a lot of cases they're actually security guards. Do not mess with them.

A subtrope of Bad Job, Worse Uniform. Supertrope of Loser Team Mascot. Compare Burger Fool, Suck E. Cheese's, Playing a Tree, and Dreaded Kids' Party Entertainer Job. Is not necessarily a suit made to look like Goofy. Don't confuse with a literal suit that looks goofy.

Bart and Homer versus Itchy

This time, the guy in the "goofy suit" gets revenge after Bart and Homer torment him at Itchy and Scratchy Land!

Bart and Homer versus Itchy

This time, the guy in the "goofy suit" gets revenge after Bart and Homer torment him at Itchy and Scratchy Land!