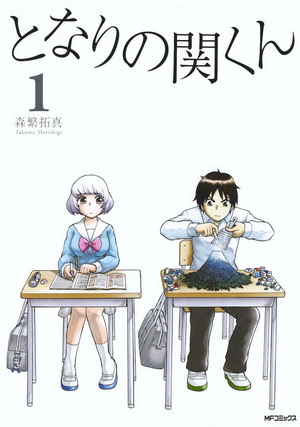 Rumi Yokoi is a normally studious girl... who sits next to apathetic Toshinari Seki, who spends the day playing his highly creative games. As much as she wants to ignore them, she cannot help but get sucked into his stories and schemes. Hilarity Ensues.

My Neighbor Seki (Tonari no Seki-kun, or "Next to Seki-kun") is an ongoing 2010 manga written and illustrated by Takuma Morishige for Media Factory's Comic Flapper compilation. The series later received an ONA and a 21-episode anime adaptation of 7 1/2-minute shorts for the Winter 2014 Anime lineup courtesy of Shin-Ei Animation. Sentai Filmworks licensed the anime for North America; Vertical licensed the manga, and began releasing the English-language version starting in January 2015.

depicting Yokoi and her 2 year old son 10 years after the end of the series. This comic would later become the basis for a Sequel Series, My Neighbor Seki Junior, announced later that year.