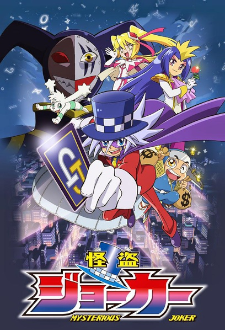 Welcome to the shining night!
Advertisement:

Mysterious Joker follows the adventures of the Phantom Thief Joker and his apprentice Hachi. Using various tricks and skills, the two match wits with the hapless police department of Tokyo, whose anti-Phantom Thief division is led by Inspector Oniyama, along with his assistants Ginko and Momo. Along the way, they also cross paths with rival Phantom Thieves Spade and Queen, as well as the villainous Professor Clover. The series follows Joker and Hachi on their attempts to steal priceless artifacts and other goods with the trying-their-hardest police force at their heels at each turn around the world.

The manga us written and drawn by Hideyasu Takahashi, and was serialized in the magazine Coro Coro Comic from 2007 to 2017, with 26 volumes published. An anime adaptation by Asatsu DK aired from 2014 to 2016, for 52 episodes.

Crunchyroll is currently streaming the anime under the title of JOKER worldwide excluding Asia. It can be viewed here

No relation to the other Phantom Thief named Joker.