Elephant in the Living Room 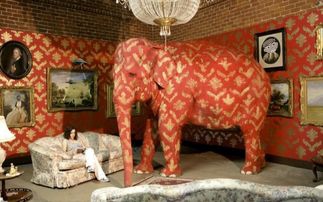 Move along, nothing to see here.
Peter: The healthiest thing we can do is just ignore this and pretend it doesn't exist. Just like we do with the squid.
[zooms out to reveal a giant squid occupying most of the room, who angrily knocks the vase, cups, and cloth off the kitchen table]
Lois: Uh, earthquake?
Peter: Eh, truck going by.
— Family Guy
Advertisement:

The Elephant in the Living Room (or "in the Corner" or "on the Sofa") is a large topic or problem which, though obvious to everyone, is deliberately or conspicuously not discussed. In most cases, this is used to create comedic tension; for example, when a character has a Big Secret he must struggle to divert conversation away from. In stark contrast, some cases of the trope create a tragic vibe, with an Elephant so awful that nobody can bring themselves to raise the topic.

For cases where there is a subject within the series that simply cannot be questioned, or else the whole premise will fall apart, it's a case of why they don't Just Eat Gilligan. If a subject is addressed with some form of implausible explanation, that is most often a Hand Wave or A Wizard Did It; when the subject is simply never addressed at all, it is the Elephant in the Living Room.

In politics, this trope is known as a Third Rail Issue, after the third rail in a subway or light rail system which is held at high voltage to provide power to the trains that run on it (and hence would be unpleasant, if not suicidal, to touch). It refers to an issue which the electorate both feels strongly about, and is sharply divided on what to do about it; therefore, a compromise solution is unlikely to satisfy anyone and will just make everyone angry. As a result, no one attempts to do anything.

In Anime, this trope is known as a Pregnant Ranma Problem, based on the following anecdotal discussion between the author/artist of Ranma ½ and a random fan at a convention:

Random Fanboy: What would happen if Ranma got pregnant as a girl, then changed back to a boy?
Rumiko Takahashi: I don't think about that, and neither should you.
Advertisement:

Which just about sums up 90% of these examples. Cheers!

Originated in an 1814 Ivan Krylov fable entitled "The Inquisitive Man", which tells of a man who goes to a museum and notices all sorts of tiny things, but fails to notice an elephant. Another common variant is the much more revolting "corpse at the dinner party."

If this is the result of time travel, see Caught in the Ripple.

See also Unusually Uninteresting Sight, The Disease That Shall Not Be Named, Ignore the Disability, Suspiciously Specific Denial, Talk About the Weather.

Said meeting does happen, and it goes down exactly as Valchek outlines it.