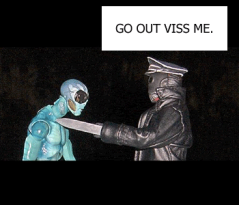 SEE?! THIS IS EXACTLY WHAT I'M TALKING ABOUT!
This is the story of two action figures and the girls who haven't realized that they're far too old to love them.
Advertisement:

is a Fan Webcomic and Toy Comic based (rather loosely) on the Hellboy movie. As the title suggests, it is about the romantic relationship between evil undead clockwork Nazi assassin Karl Ruprecht Kroenen and the psychic government agent fishman Abe Sapien.

The entire thing is rather silly, for obvious reasons, but seems to attract a surprising amount of fans. Guillermo del Toro himself has even claimed to be a fan...