Webcomic / The 13th Ghost of Scooby-Doo 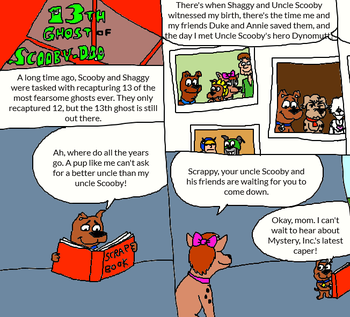 The first four panels.
The 13th Ghost of Scooby-Doo is a Scooby-Doo webcomic on DeviantArt drawn by user LuciferTheShort.
Advertisement:

The comic serves as an alternative conclusion to The 13 Ghosts of Scooby-Doo, the only elements kept from Scooby-Doo! and the Curse of the 13th Ghost being Flim-Flam having aged since the events of the original show as well as the 13th and final ghost from the Chest of Demons being Asmodeus and having the backstory of being a corrupt ancestor of Vincent Van Ghoul who turned into a demon.

The story begins with Mystery, Inc. having a barbecue at the house of Scooby's sister Ruby Doo and his nephew Scrappy-Doo, when they suddenly get a call from Vincent Van Ghoul's crystal ball that he's found the last of the 13 ghosts. Mystery, Inc. must then work together to recapture Asmodeus and put an end to the debt Shaggy and Scooby owe Vincent Van Ghoul.

You can start reading the comic here